On May 4, 1992 my life changed forever.  My first child was born allergic to this world.  My son consistently vomited breast milk and within a couple of months was on formula.  The conversion to formula turned out to be a troublesome trial and error experience.  Our pediatrician did not believe allergies were the cause because of his age but he could not provide any alternatives.  At age 9 months, my son had his first and probably his last glass of milk.  After the 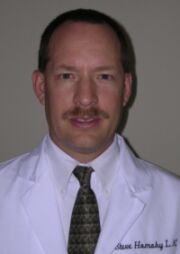 initial sip, he immediately vomited and his face became covered with hives.  We were then able to convince our pediatrician of his allergies.  The doctor told us to avoid milk products and to start an allergy shot program once he was older.  I personally went through my childhood getting allergy shots and knew what he was going to go through. My son had a series a RAST tests at two years of age.  He was allergic to everything.  My wife and I continued the avoidance routine until age four but found it harder and harder.  At this time in my son’s life, a typical day consisted of many Nebulizer treatments and all his meals and snacks being prepared by us. My wife and I did not have a very hopeful picture of his future.

By chance, the Nambudripad’s Allergy Elimination Treatment (NAET) was introduced to us.  Both my wife and I have engineering degrees and found this technique unbelievable but we were at the point where we would try almost anything.  We started the treatments and immediately saw a positive impact.  Our friends also began to see the difference in our son’s appearance and attitude.  A critical time for us was when we explained to him that he was no longer allergic to milk and for breakfast the next day he asked for a danish, a potentially hazardous item due to the milk products it contained.  We gave him one, ready to call 911, and nothing happened.  My wife and I then knew the treatments were the cure to his allergies.  We continued the treatments on a daily basis for about 3 months, then bi-weekly for about a year.  We now use the treatments on as needed basis.  I can now say that my son is a normal happy 16-year-old and rarely takes any prescribed medications.

After 15 years as a petroleum engineer, the experiences that my family encountered led me to change careers.  I received my Masters Degree in Oriental Medicine from the Dallas College of Oriental Medicine in 2002 and am nationally board certified in Acupuncture and Chinese Herbology.  In my practice I use a combination of Zyto Scanning, Nambudripad’s Allergy Elimination Treatment (NAET), and Traditional Chinese Medicine (TCM).  By applying the combination of these different techniques, I am able to address a wide variety of conditions from acute to chronic pain, symptoms due to allergies, symptoms due to hormonal imbalances and many other disorders.